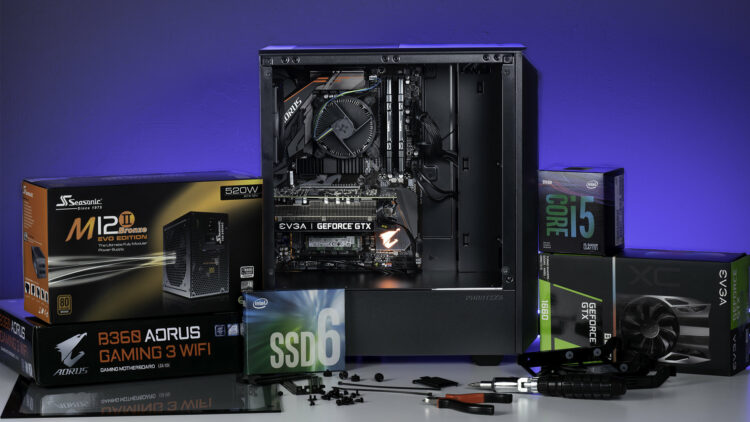 Budget PCs haven’t always been a sure thing when it comes to gaming. After all, the more powerful the components are, the more expensive they are. Or, at the very least, they used to be. Graphics cards and processors are more accessible than ever before, thanks to AMD’s competent yet affordable options such as the discount AMD Radeon RX 5700 and value-oriented Ryzen 3rd Generation CPUs. This has enabled low-budget PCs to enter the gaming scene and make some very spectacular contributions of their own.

You don’t have to spend a fortune to fully immerse yourself in the largest AAA titles or the most popular indie games these days. With a few compromises here and there – you might have to play at lower settings or you might not have some badass RGB lighting – the best budget gaming PCs will do the job just fine

The Lenovo Legion Tower 5 is well-equipped to handle 1080p and 1440p gaming, with plenty of power for almost any game you throw at it. The AMD Ryzen 7 5700G CPU inside has eight fast cores that can keep up with your gaming needs while allowing you to run background programmes – useful if you want to communicate on Discord or stream your games.

The machine also includes an Nvidia RTX 3060 graphics card. This is where the muscle comes into play, allowing you to play esports and AAA titles with ease. The RTX 3060 should easily let you to view high frame rates in esports titles, whether you want to run super fast at 1080p or simply want the balance of 1440p clarity at a smooth 144Hz. Lenovo includes 512GB of fast storage to keep the computer snappy and to house your favourite games. An additional 1TB hard drive allows you to store extra-large data as well as a larger game library.

The HP Omen 30L is a competent gaming desktop with a small desktop footprint and an inexpensive pricing.
This system’s chassis is only 6.5 inches wide, allowing you to keep it on top of your desk without taking up too much space for your keyboard and mouse. But just because it’s narrow doesn’t mean it won’t have powerful internals.

This HP Omen 30L configuration has a six-core AMD Ryzen 5 5600G processor and an Nvidia RTX 3060 graphics card. Unless you’re looking to push into 4K or perform some major streaming, this PC should be plenty for your gaming needs. HP has even incorporated a 1TB SSD to provide a snappy system and speedier game loading.

It is simple to attain 1080p gaming quality. All you need is a fast CPU and a modest graphics card. That’s exactly what the CyberPowerPC Gamer Xtreme we choose provides. Inside is an Intel Core i5-11400F processor, which isn’t quite a beast but is more than capable of getting the work done while keeping the price low. This is combined with a highly capable AMD Radeon RX 6700 XT graphics chip, which isn’t great for ray-tracing or 4K but can handle 1080p.

The system ships with a 500GB SSD to keep the operating system and your most-played games running quickly, but it also contains a 1TB hard drive for storing files and your extensive game library. As an extra bonus, four RGB fans are pre-installed on the system.

Nvidia’s RTX 3060 is an excellent companion for 1440p gaming, but it’s difficult to obtain straight from shops.
However, if you’re searching for a full computer that can provide 1440p gaming brilliance, the SkyTech Shadow 3.0 is a fantastic choice.

This PC is well-equipped, with an AMD Ryzen 5 3600 processor and 16GB of DDR4 RAM clocked at 3,000MHz.
That’s more than enough power to keep your system working smoothly. With the RTX 3060, you’ll be able to compete with the best. The CPU won’t exceed 300fps at 1080p, and the GPU won’t fare much better at 4K, but they’ll strike a good balance at 1440p, resulting in quality images and smooth frames for a terrific gaming experience.

NZXT’s BLD Starter Pro not only provides a powerful machine, but it also streamlines the process of acquiring a computer that will provide the performance you require. You can view the frame rates you may expect from your pre-built system based on the hardware setup with NZXT’s BLD series. No more guessing whether one CPU and another GPU will combine to provide a consistent 144fps in Fortnite at 1080p (hint: it’s 168fps in Fortnite on this build).

The NZXT BLD Starter Pro is powered by an Intel Core i5-11400F processor and an Nvidia RTX 3060 graphics card.
That should handle everything but the most demanding games and deliver adequate performance at 1080p and 1440p. There’s also 1TB of PCIe NVMe SSD storage for a quick access to your game collection. Another significant advantage of NZXT’s BLD systems is that the company clearly discloses the brand-name components utilised, giving you a clear picture of what’s in the build. Plus, it’s all housed in a NZXT H510 case, which is a smaller version of one of our favourite mid-tower PC cases.

What to Look for in a Budget Gaming PC

While many of the best gaming PCs are expensive, especially if you want to play the most graphically taxing games at the highest or ultra settings, it is feasible to get a more than adequate gaming rig for a fraction of the price. Budget gaming PCs that do little are almost extinct now that competition in internal components has heated up, thanks in large part to AMD.

Of course, if you want a good gaming experience, you can’t just go out and get a cheap gaming PC. Some conditions must be met, particularly in terms of graphics and memory, as these are the most important when it comes to managing graphically intensive tasks such as gaming.

GPU that is discrete

The good news is that there are a plethora of excellent discrete graphics cards available that are ideal for gaming, and they’re more inexpensive than ever, with AMD and Nvidia competing in price and performance. The disadvantage of this is that there are a lot of options available, and it might be difficult to chose when you’re unfamiliar with them.

The unrivalled GPU champion for gaming right now is the Nvidia GeForce RTX 2080 Ti — while AMD is reported to be preparing an AMD Navi card that may dethrone it. That card, however, will come at a cost.

The Nvidia GeForce GTX 1660 Ti and GTX 1660 Super are budget heroes for gaming. In terms of value, the AMD Radeon RX 5600 XT and AMD Radeon RX 5700 XT even outperform the mid-range RTX 2060 Super. The AMD Radeon RX 5500 XT is a great bargain-basement performance if you’re searching for something dirt-cheap.

When it comes to gaming, the speed and amount of RAM in your gaming PC are more important than the processor. Memory takes precedence after the graphics card (here’s why), therefore it’s crucial to consider while deciding on the best budget gaming PC for you.

Although 8GB of DDR4 memory is now considered normal and the minimum for gaming, you may want to consider upgrading to 16GB of RAM. This should help your PC speed up in general, not just for gaming. Many low-budget gaming PCs already include this in their base configuration. However, if you’re considering something with less than 16GB of storage, upgrading shouldn’t be too expensive.

While the type of processor is third in the pecking order when selecting gaming PCs, it is still important. You’d want a processor that can handle intense gaming. The more recent, the better, because next-generation Intel and AMD processors are often substantially speedier than their predecessors from the previous year (though sometimes, not by much). However, if you’re looking to save money, newer isn’t always the best option.

With AMD CPUs, the storey is a little different. Typically, AMD releases budget and mid-range processors that are quite affordable regardless of your budget. These savings are extended to the gaming PCs they power, which only helps the frugal consumer. If you’re looking for details, the AMD Ryzen 7 3700X or the even cheaper AMD Ryzen 5 3600X are also excellent choices.

In any case, you should be paying great attention to the clock speed. Anywhere between 3.5 and 4.0 GHz should be plenty for gaming.