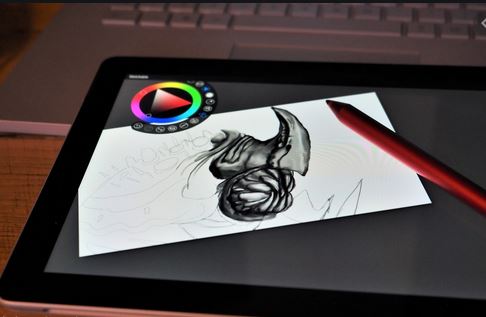 This article will go through Ten of the best surface pro drawing app that are worth installing and utilizing for business, study, or simply passing the time and having some fun. These Microsoft Surface drawing applications include everything from a kids video game and sketching app to a flashcard program that supports handwriting and the greatest note-taking app with pen support.

Spirality is a unique Surface Pro drawing app. Rather than serving as a blank canvas for users to draw on, Spirality employs a one-of-a-kind workspace that enables the production of truly spectacular spiral mandala designs with simple gestures and strokes.

Although the digital creations appear intricate, they are surprisingly simple to create and only require you to drag your Surface Pen or mouse in various directions across the screen to produce results. Those who desire more control over their art can draw freehand, and the complete color spectrum is accessible via the top toolbar. Spirality allows you to export all of your creations as still photos, animated GIFs, and movie files. Every feature is also entirely free, with no in-app payments required.

Autodesk SketchBook is by far one of the best Surface sketching apps, because to its extensive set of features and digital art tools, which are increasingly in demand by professional designers, architects, and producers.

Previously, the Windows SketchBook program required a premium subscription to access many of its features. However, it has removed the subscription tier entirely, and its full functionality is now available for free within the app. Anyone may use the 190 customizable brushes, rulers, and limitless layers in free drawing program without paying a dollar or even signing up for an email list or account subscription.

Microsoft’s OneNote program is an amazing powerhouse of a tool that allows you to create notes on one device, sync them to the cloud via your Microsoft account, and access them nearly instantly on an Android or iOS smartphone or tablet, a Mac, or another Surface Pro.

OneNote is one of the greatest note-taking apps for stylus aficionados due to its ability to rapidly transition between standard keyboard typing and sketching with a finger or Surface Pen. For individuals who want to collaborate with friends or colleagues, the numerous sorting and sharing options are useful. OneNote is unlikely to produce high-quality artwork, but if you’re looking for an app to scribble down some handwritten notes, it’s hard to beat.

If you’re looking for a super-simple drawing program for your Surface Pro or any Surface device, Microsoft Whiteboard is unrivaled. This program has a simplified interface that is geared for users who like to use a pen, such as the Surface Pen, while it also works well with a mouse and basic touch controls.

Along the bottom of the Microsoft Whiteboard screen, you can easily access the pen size and color settings. They’re also big enough for kids to interact with without unintentionally choosing the wrong function. Whiteboard has more line and chart tools, as well as robust import support for PDF files and photos from the Bing search database. The app’s key selling point is seamless device syncing and a simple link sharing function, which allows several individuals to work on the same digital workspace at the same time across different Windows, Mac, iOS, and Android devices.

Microsoft’s Expressive Pixels is a free program for making pixel art and animations on the Surface Pro and other Windows 10 devices. Using only a mouse or stylus, users can create new pixel artwork, update old ones, or download those created by other users via the integrated online community tab.

Pixel creations can be saved locally as GIF or PNG files, or exported to connected LED displays, technology, smart clothing, and accessories such as LED goggles and masks. Many major third-party LED device makers, including as Adafruit, Sparkfun, and SiliconSquared, are supported, and sketching, modifying, and exporting artwork is simple and uncomplicated. To download Expressive Pixels, you must first sign in to your Microsoft account.

6 . Best App for Learning to Draw With a Surface Pen: Sketchable

Sketchable, along with Autodesk SketchBook, is one of the top Surface Pro drawing apps available in the Microsoft Store. Sketchable has a plethora of brush types, color possibilities, and tools to enable you produce some truly professional-grade drawings, as well as a UI meant to be accessed and operated with a stylus. It’s worth noting that some of the more advanced capabilities are locked behind a one-time $24.99 paid upgrade.
All of the fundamental sketching and painting tools are available for free.

What distinguishes Sketchable is its heavy emphasis on educating and training new users on how to use the software and make the most of all of its capabilities. Many high-quality Sketchable tutorials can be viewed directly from the app. The official website includes a free thorough manual that can be downloaded and read, as well as artist spotlights that highlight what you can create with just this program and a Surface Pro.

Index Cards is a complete flashcard program for Windows 10 that allows you to build an endless number of cards and card sets. The program naturally supports words typed with the Surface keyboard, but its main selling point is its ability to handle words or graphics created with touch or a linked stylus.

Index Cards stands apart from similar programs in the Microsoft Market app store thanks to its support for handwritten and drawn material. This extra functionality is useful for individuals learning languages such as Japanese and Mandarin, which emphasize writing characters as well as reading them. It’s also handy to be able to sync all produced cards to free iOS and Android smartphone apps. It’s worth noting that after the initial two-week free trial period, free users will be limited to only 50 cards.

Xodo’s PDF Reader is one of the best Windows 10 programs for reading, producing, and manipulating PDF files.
It’s also entirely free, with no in-app purchases or push to switch to a premium edition. With a few clicks, you can open PDF files, and there are built-in tools that allow you to create new PDF files from a blank canvas or by importing an image. Users can also take images from within the program.

There are numerous editing tools available, as well as strong support for sketching and handwriting using a Surface Pen or similar pen. It is simple to sign a PDF file with a handwritten signature.

Draw A Stickman is a one-of-a-kind video game for Surface tablets that allows the user to draw their own character and then play as it for the duration of the game. After being made, the character can be moved about levels by dragging a pen or finger across the screen, and subsequent drawings can activate attacks or effects.

The initial few levels, for example, encourage players to draw fire to burn down trees or cause explosions to clear roads. Draw A Stickman, on the other hand, does not limit players and allows them to draw wherever they wish on the screen. Players can draw flames all over the screen and burn down every tree in sight if they want to. Draw A Stickman is a drawing game for kids, as well as their older siblings and parents.