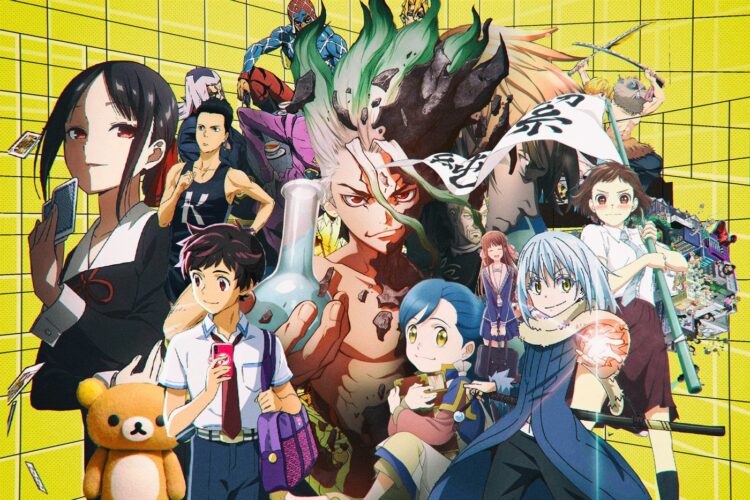 Angels, spider mechs, and demon-slaying are just a few of the things to look forward to in the Fall 2021 anime season. For the Fall, we have a slew of new anime, including the action-packed JoJo’s Bizarre Adventure: Stone Ocean, the humorous Komi Can’t Communicate, and the wonderfully animated takt op.Destiny. Demon Slayer Season 2: Entertainment District Arc marks the return of one of the most successful anime series in recent years.
There are several venues to watch anime right now, including Crunchyroll, Funimation, and Netflix, among others.

Check out some of our favourites in the video above or the slideshow gallery below, then scroll down for the entire list of new Fall season 2021 anime in the United States and their respective streaming services. Unless otherwise specified, all of the anime listed are currently available.

Fans of Death Note, unite! The original Death Note writer and manga artist are the same people that created the Platinum End manga series, which is currently getting an anime adaptation! Mirai, an orphaned student who attempts suicide, is the protagonist of Platinum End. An angel saves Mirai just before he dies because he wishes to be happy. Mirai is bestowed with exceptional abilities by the angel, who also informs him that he is a candidate to be the new God. Yeesh! Tsugumi Ohba, the creator of Death Note, is at it again! Am I correct?
Platinum End has been dramatic thus far, and we can only imagine how intense it will become as the series continues to investigate the essence of life and death. Crunchyroll and VRV are now carrying the series.

Sakugan follows Memenpu, a young girl who aspires to discover the world beyond her underground colony home. Her father prevents her from travelling, but a life-changing event steers the pair in a new direction. Sakugan gives us some emotional and disturbing Made in Abyss vibes, and we love it. The series has only recently begun, but it goes from 0 to 60 in a flash. We’re excited to see where this father-daughter adventure takes us as the season progresses. Sakugan is currently available on Crunchyroll and VRV.

Mushoku Tensei: Jobless Reincarnation returns this Fall to finish out the season. Rudeus, a jobless slob, is resurrected as a newborn baby in a realm filled with magic and monsters in the series. The first half of the season focuses on his acclimatisation to this new body and world, while the second half shows Rudeus putting his newly acquired knowledge to use in a fresh setting. Mushoku Tensei: Jobless Reincarnation is the year’s most popular isekai anime. If you want to see what all the fuss is about, you can now watch the latest episodes of the series on Funimation.

One of the season’s most gratifying surprises has been the ranking of Kings. The series follows Bojji, a young deaf prince who is often mocked for his condition. Even his father, a colossal monarch, insists that he grow stronger for the benefit of the realm. Bojji meets a sly shadow figure named Kage and befriends him because he understands the little prince. The two form an odd bond, which we want to see more of as the season progresses. Ranking of Kings has a distinct art style and vibe reminiscent of Studio Ghibli’s work on Ni no Kuni: Wrath of the White Witch.
To top it all off, this anime is being produced by Wit Studio, who have previously worked on Attack on Titan and Vinland Saga. We can already imagine ourselves on the emotional roller coaster that this series may deliver. Ranking of Kings is now available to watch on Funimation.

ORA ORA ORA ORA! Stone Ocean, or Part 6 of the iconic shonen series, JoJo’s Bizarre Adventure, is back.
For those who are unfamiliar, the series follows the Joestar family line, beginning with JOnthan JOestar. In the series title, you can see where JoJo comes from. Because this is an intergenerational drama, we’re finally witnessing the anime version of Stone Ocean starring Jolyne Cujoh, which takes place more than 100 years after Part 1 of the series. JoJo’s Bizarre Adventure is well-known for its high-octane action, outlandish graphic style, and cultural music references. That’s correct! There are musical references. If you enjoy action with a watch, JoJo’s Bizarre Adventure is a must-see. Before diving into Stone Ocean, we recommend watching the prior seasons, which are all available on Crunchyroll. The show will debut on Netflix in December.

This Fall, Komi Can’t Communicate is a widely anticipated slice-of-life anime. The series revolves around Komi, a popular student who, as the title suggests, “can’t communicate.” She encounters Tadano, a classmate who recognises her plight and tries to help. The anime series has a distinct style that takes Komi’s communication difficulties straight from the manga panels. OLM, the company behind ODDTAXI and several Pokemon series, is behind Komi Can’t Communicate. It’ll be interesting to observe how this relationship develops throughout the season. Komi Can’t Communicate is now streaming on Netflix.

Retsuko, the karaoke-loving career red panda, returns for Season 4 of the series. Aggretsuko is set in a planet populated by anthropomorphic animals. The series follows Retsuko, our red panda protagonist, as she goes about her daily life, occasionally encountering a tumultuous situation. Retsuko has built closer bonds with the people in her life at this time in Aggretsuko. According to the poster art, there are a few characters to watch an eye out for this season. Check out Aggretsuko if you’re searching for a fun slice of life this fall. Season 4 of the show will premiere in December.

takt op Destiny is an original anime series that was revealed alongside a game of the same name. Takt, a pianist, lives in a world where music is forbidden because it attracts monsters that once roamed the globe. These monsters brought with them a unique ability to combat them in the form of Musicarts, enigmatic weapons that harness the power of song. Destiny is developed by two well-known studios. MAPPA, best known for big shonen titles like Jujutsu Kaisen and Attack on Titan’s Final Season, and Madhouse, best known for One Punch Man season 1 and Hunter x Hunter. From what we’ve seen so far, these two studios are producing incredible battle animation.
If you enjoy shonen anime, you should watch takt op. Destiny, which is currently accessible on Crunchyroll and VRV.

This Fall, 86 is back for Part 2! This powerful mecha anime debuted earlier this year and is currently getting its stride. 86 follows Lena and Shin as they negotiate a conflict with AI mechs known as the Legion. Lena is in charge of the 86 squadron, which Shin leads. Lena learns about the history of the persons marked 86 as a result of this arrangement. With tensions high between Lena’s people and the 86, it’ll be intriguing to watch where Part 2 goes as the season unfolds. If you enjoy political mech dramas in the vein of the Gundam series, 86 is a must-see. Crunchyroll and VRV are now carrying the series.

Finally, Demon Slayer lovers, get ready! The wait is nearly over! The much-anticipated Entertainment District Arc will debut in the Fall of 2021! Not only that, but in the seven episodes preceding the launch, we get a closer look at Rengoku and the Mugen Train Arc. For those who have been living under a rock and have missed the largest anime in recent memory, Demon Slayer follows Tanjiro, a young boy who is pushed into the world of demons after his entire family is murdered. His sister, Nezuko, lives but transforms into a demon. Tanjiro makes it his mission to find the source of all Demons in order to save his sister from this sickness. For God’s sake, the Demon Slayer Mugen Train movie broke many box office records. There isn’t much else to say except that you should watch this great anime right now! Kimetsu no Yaiba, Demon Slayer Entertainment District Arc releases on Funimation, Crunchyroll, and VRV on December 5.