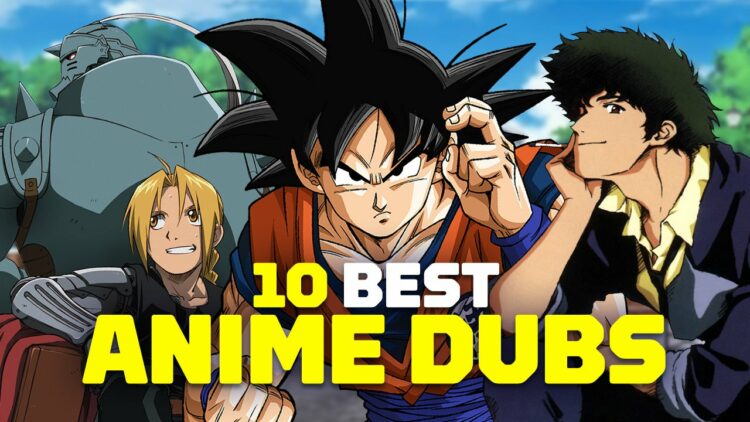 Over the years, most anime viewers have grown accustomed to watching subtitled anime. For those who are unfamiliar with the anime genre, it might be difficult to focus on both graphics and words at the same time.
This is where English dubbed anime comes into play.

Anime Websites That Are Legal:

The websites listed below are where you can view English-dubbed anime in 2021. They are all legal ways to watch anime online. As a result, you can be confident that these dubbed anime sites are free of redirect adverts and potentially harmful features, which is not always the case with the unauthorised alternatives listed further below.

Without a question, Netflix is one of the best websites in 2021 for watching English-dubbed anime. This is due to the fact that it is the only legal anime streaming website that is available in numerous countries.

However, the catalogue is lacking, with numerous shows either missing or lacking a dubbed version. Having said that, the platform includes Hunter X Hunter Dub, Full Metal Alchemist Dub, Demon Slayer Dub, and a number of other popular dubbed anime.

Funimation is a renowned website for watching free English-dubbed anime.Because the portal focuses on dubbed anime, you may view dubs of many of your favourite anime for free. This dubbed anime service, unlike Netflix, offers a massive catalogue.

However, Funimation is only available in a few countries, including the United States, Canada, the United Kingdom, Ireland, Australia, and New Zealand. You may, of course, circumvent geographical restrictions by using a VPN. If you’re determined to watch dubbed anime for free, we also offer a list of the best free VPNs. While some dubbed anime on Funimation is free to watch, some need a monthly fee.

Crunchyroll is not far behind when it comes to the best websites to watch free English dubbed anime. With over 1,200 anime series, the website is the largest anime streaming portal.

Yes, for those who don’t know! English dubs are available on Crunchyroll. However, as compared to other websites, the platform has fewer dubbed anime. Having said that, it is the only legal English dubbed anime site where you can watch free dub anime (with ads). While the anime website can be accessed from any location, the content is only available in a few regions.

In 2021, AnimeLab is one of the best websites to watch English-dubbed anime. Unfortunately, the website for dubbed anime is only available in Australia and New Zealand. However, you can watch anime online by using a reliable VPN.

Funimation recently shut down its service in Australia and amalgamated with AnimeLab, adding over 200 new dubbed anime to the site. AnimeLab has dubs of various popular and new anime, like the final season of Attack on Titan, That Time I Got Reincarnated As A Slime, and more.

While you may watch anime online for free (with commercials) on AnimeLab, the dubbed content is only available after paying for a monthly or yearly subscription.

The best thing about Amazon Prime, like Netflix, is that it is widely available. However, it is also one of the anime sites with a limited selection of anime. On the website, there are even fewer English-dubbed anime.Still, if you have Amazon Prime, you should see if any of your favourite anime English dubs are accessible on the platform.

9Anime is a popular website for watching anime online. It includes a massive archive with older and unusual series, as well as a tonne of free English dubbed anime.

Because the dubbed anime website only enables streaming in 720p and 1080p, those with weaker internet connections may have difficulty watching anime online. The website also has pop-up adverts, which might be unpleasant at times. However, if you want to watch English dubbed anime for free, head to 9Anime.

Gogoanime is another another free dubbed anime website where you can watch anime online as well as download episodes. The content on this dubbed anime website is accessible in a variety of video quality options.
The website also shows when the next English dub of an anime will premiere.

JustAnime is a website where you may watch free dubbed anime in 2021 without being troubled by commercials or a cluttered UI. The website has a Netflix-like appearance and has all of the most recent and popular English dubbed anime. You can search for anime by genre, status, type, or parental rating. Animefever also offers an Android and iOS app, albeit the latter is still in testing. This dubbed anime website, which provides free English dubbed content, is quite popular among anime fans.

AniMixPlay is another free website where you may watch English dubbed anime. The website offers an easy-to-use layout and an internal player that works flawlessly.

There are no advertisements on the website, and it has all of the most recent anime. You can also select from a variety of stream kinds and use the one that best suits your needs. On this free dubbed anime website, you can also view the anime timetable for release dates.

If you’re still undecided about where to watch anime for free, this anime dubbed website can pique your interest. AnimeFrenzy, unlike other anime websites, lists new anime in the queue one after the other. There is a Dubbed area where you can find all of the dubbed anime, both new and old. Anime can be sorted by genre, status, year, and type.

The website appears to be a little cluttered, with far too much content on the page. On the plus side, you won’t be bombarded by redirect advertising while using the media player.

So those are some of the best websites to watch free English dubbed anime. Both popular legal and illegal sources were listed. However, we would like to remind you of the risks associated with using illegal websites and, as a result, encourage that you utilise legal sites to watch anime online.

How to Make A Bootable MacOS Mojave Installer Drive

Best PSX Emulators You Should Not Miss Out